Check out our eBooks available from Apple’s iBooks Bookstore and Amazon’s Kindle store.

You Got Beat by a Girl discusses the many Battle of the Sexes competitions between Louis and Char Magnifico: everything from our mixed wrestling and arm wrestling matches to intellectual challenges and fun games.  The psychology and sociology of the male being beaten by the female is discussed at length as is the relationship aspects of female dominance (and how this fantasy can be the makings for a very exciting marriage!)

Why do so many men find Girl Power so attractive?  Why are men embarrassed when they lose a match or competition to a girl?  This book is filled with tons of pages of full color pictures of Louis and Char in action and includes two sections just of photo galleries!

Over 65 pages of fun and excitement in You Got Beat by a Girl by The Traveling Twosome!

This is a book we were asked to write by our fans who were intrigued by our numerous Battle of the Sexes competitions we’ve showcased on our TV Channel and website.

The book is AVAILABLE NOW as an eBook for iBooks and Kindle.  Just click below to go straight to the Apple iBooks or Amazon Kindle store to download your copy of You Got Beat By A Girl!

On August 9, 1995, Jerry Garcia of The Grateful Dead passed away. But few people realize that something happened earlier that year in Memphis, TN that might have been the indirect cause of his untimely death. This is that untold, true story.

How I Killed Jerry Garcia is the TRUE story about my actual involvement in the death of Jerry Garcia from The Grateful Dead. Bet you didn’t know I had a role in that, did you? You learn something new about me every day, I guess. It’s a 100% true account of what happened.

Enjoy the book… and let me know what you think!  And for those of you wondering, yes, that’s Char on the front cover.  And no, she was not involved in the death of Jerry Garcia – just me.

Here are the links to download it from Amazon for the Kindle reader and app or iBooks for the Mac or iOS:

Louis and Char Magnifico (The Traveling Twosome) were trained by pro wrestlers then stepped in the ring for a mixed gender match against each other which Char won with ease.  Both Louis and Char recount the events and they tell about their experiences with wrestling after that day.  There’s also a section on Andy Kaufman.  Plus, the book is filled with many great full color photographs that capture their wrestling action!

What are you waiting for?  Go ahead and download The Traveling Twosome: A Day in the Life of a Professional Wrestler by Louis and Char Magnifico from Apple’s iBooks Bookstore or click here to download from Amazon for the Kindle or Kindle App!

Louis Magnifico has released a new eBook that tells you everything you ever wanted to know about how he got Char to go out with him… and it might just light a spark in your own relationship!

Yes, it’s true… my latest eBook – available now on Apple’s iBooks Bookstore for the Mac and iPad as well as Amazon for the Kindle App and Tablets – is sort of the “Big Fish” version of our story.

In all, there are 25 hilarious tall tales of how Char and I became an item.  Each one is true… in a very embellished, twisted, exaggerated, or otherwise altered way.  But don’t fret – the last chapter is entitled “The Truth.”

Each tall tale is accompanied by a picture matching the narrative – and some of these pics, you’ve just got to see!

You don’t want to miss out on this hilarious book!  The pictures themselves are worth the download!  I published this book as a Valentine’s Day gift for Char this year.  I hope you enjoy it as much as Char has!

Enjoy our other websites… 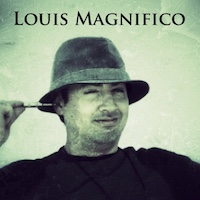